PLENTY of AFL Fantasy Draft leagues have been created and coaches are preparing for their annual draft day.

Setting pre-draft rankings makes life easier when you're under the pressure of the clock when it’s your turn to make a pick. Although you can search through player lists and rank them by last year’s average or their current ADP (average draft pick), having players ranked in the order in which you would select them can help you make the right call.

Once you are entered into a Draft league you have the option to set your pre-draft list by dragging and dropping players into position, assigning a draft number or simply clicking 'up-and-down' next to their name. 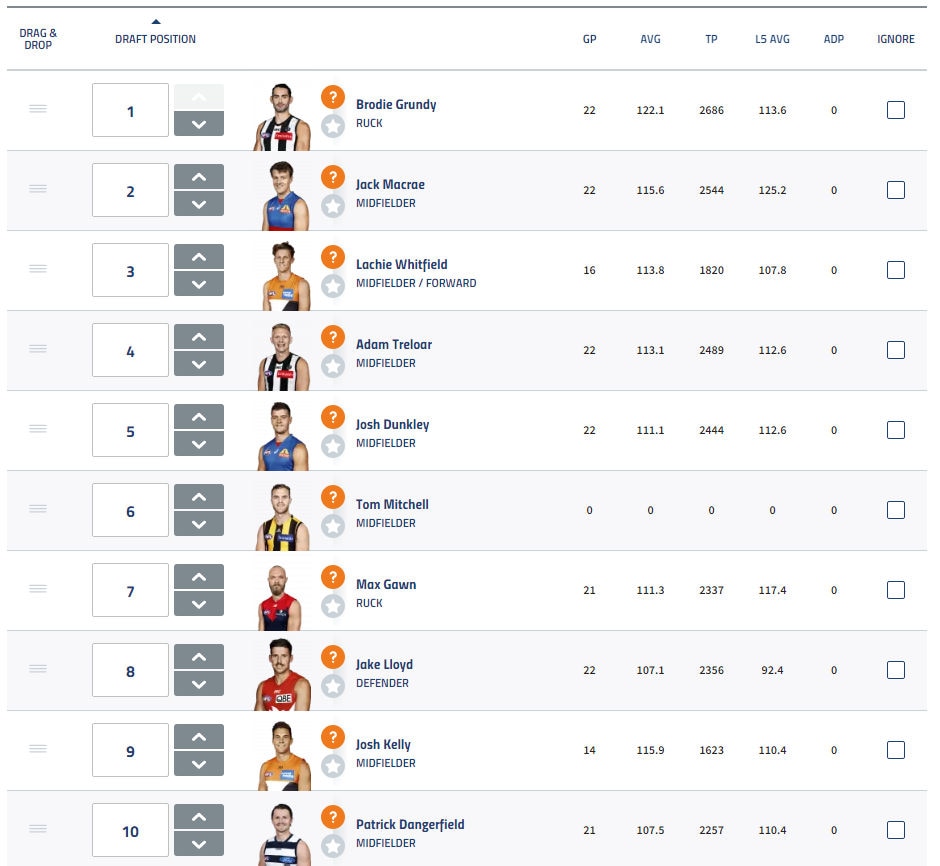 Compiling your rankings can take in a lot of data. In Fantasy Draft, durability can be more important as scoring ability when deciding between players. Someone coming off the bench is unlikely to score as well as a star out injured. Looking across games played in recent years, or even pre-season injury lists, can help highlight those who could be better options to rank higher than others, despite a high previous average.

Past scores/averages can help guide your rankings, but it is all about what you think players will score this year.

Is there greater opportunity to score due to list changes? Were scores inflated last year due to injuries to other key players? For some coaches, a lot goes into setting pre-draft rankings … but often it comes down to a gut feel.

And, you've got to like the players you're drafting!

Midfielders will feature heavily over the first couple of rounds as coaches look to lock in captain options. With only a handful of premium players in other positions, some will look to grab one of the top defenders, rucks or forward early on.

After two years averaging 120-plus and by far the best for his position, Brodie Grundy will be the first pick in almost all leagues. Jack Macrae and Adam Treloar have been consistently high scorers over the last few seasons and will be the first midfielders taken with Josh Dunkley, who averaged 117 after the bye last year, nipping at their heels. Lachie Whitfield averaged over 15 points more than the next best forward, and despite his questionable durability, will be a sought after player in the first round on draft day. Jake Lloyd and Max Gawn should be considered early on as they are also a few points better than other players in their respective positions.

105-115 averaging midfielders are likely to be taken throughout the second round, especially if captains are on. Dustin Martin is tipped to be the second-highest scoring available forward, while Rory Laird may return numbers akin to those in 2018 (107.8 average) to be the only 'other' positions to feature here.

Having not missed a game in the last five seasons, Jack Crisp is worth targeting in the third round. The Pie averaged a career-high 97.7 and has proven to score just as highly playing on the ball or across half-back. Devon Smith has received a huge rankings boost considering the 79.4 average that sits next to his name following an injury interrupted 2019. A record number of tackles in the previous season saw Smith average 106.6 and could be in the mix as one of the top forwards. Before missing two seasons with two ACL injuries, Sam Docherty averaged a whopping 116.8. While it would be hopeful to think he’ll return those figures, he’ll be among the top few defenders available this season.

Ruck selection is always interesting year-to-year in Draft. Reilly O'Brien enjoyed an outstanding 2019 and is predicted to improve once again. I've got him just ahead of Jarrod Witts, who was also excellent last year, but his pre-season injury has seen him slide.

At this point of the draft, coaches will still be picking midfielders who should average more than 100 and other positions that should go at more than 90. It is an opportunity to start looking at players who may have a role change that could produce increased points. Dan Houston is one of these. The Port Adelaide 'defender' is looking at more midfield time this year as he did to finish last season. In the last five rounds, Houston averaged 103 playing extended periods in the middle.