The competition pits the Eye Gougers against the Pains, but in the Pub Footy league getting around each other is more important than getting a win. Photographer Sarah Morton and writer Celia Drummond pay a visit.

IN THE mixed changerooms in Victoria Park, the historic home of AFL powerhouse Collingwood, Labour in Vain's coach is delivering a rev-up ahead of their match against the Lomond Hotel Barracudas.

"I want inclusiveness," he says. "Run hard and then get off to give everyone a go!"

"I want positivity! I want humour! Tell a dodgy dad joke to your teammates!"

Established in 2009, Pub Footy, as nearly everyone calls it, is home to nine teams based around pubs in Melbourne's cosmopolitan inner north. Among them are the Railway Eye Gougers, the Victoria Hotel Galahs, the Crazy Arms Bats, and the Some Velvet Morning Easybeats.

As the team names imply, tooth-and-nail competition isn't what Pub Footy is about.

No league ladder is kept, and players regularly finish games not knowing if they've lost or won. 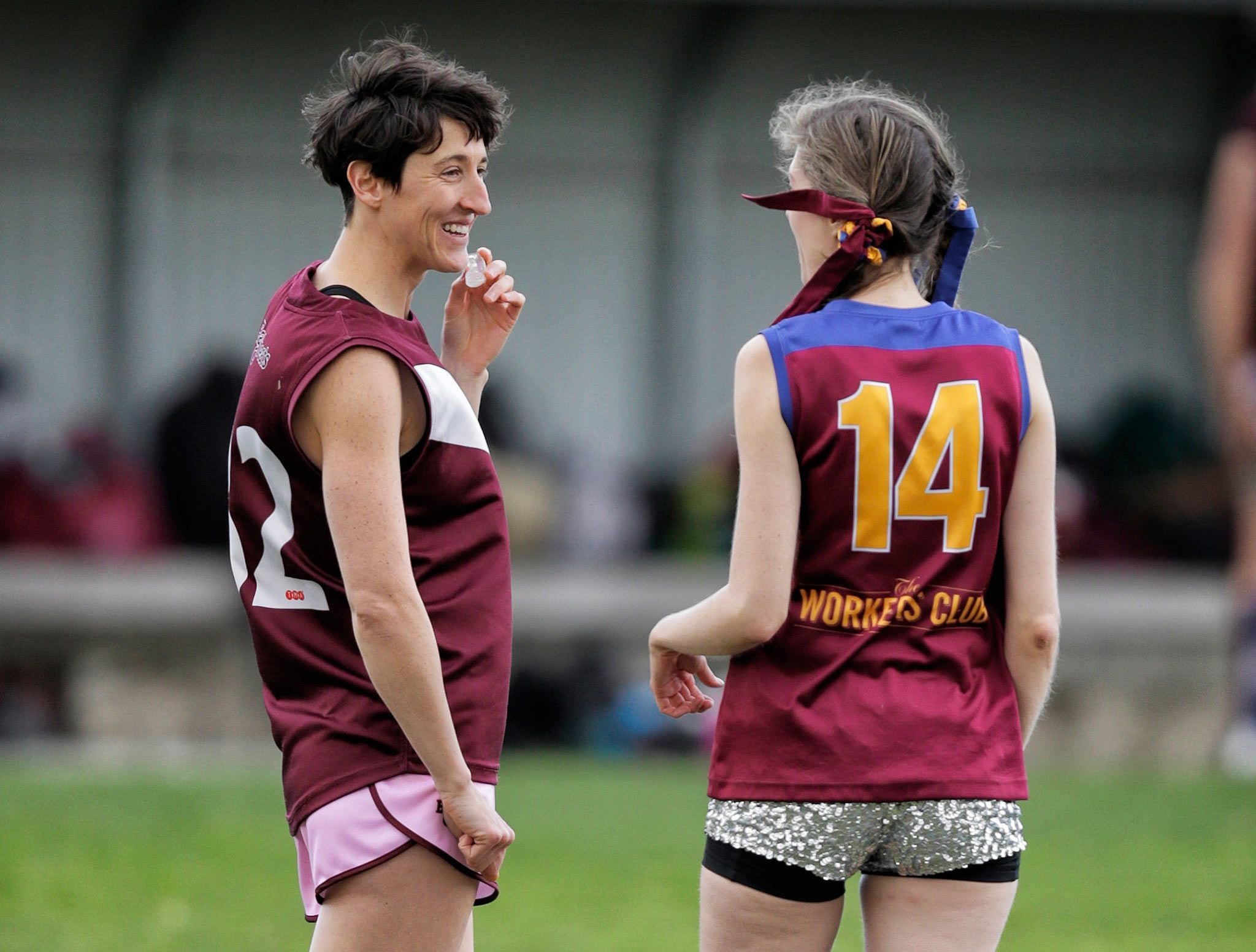 Unusually for an adult league in a sport which can involve bruising physical contact, the teams are mixed gender.

"There's no hard and fast rule out there such as 'no male can tackle a female'," says Pub Footy president Katrina Annan.

"We all just use a bit of common sense before going into a contest. It just works."

Annan also captains the Old Bar Unicorns, who enter the ground mimicking a horn on their heads, followed by a team dance before they run into position.

When a player snaps a goal from the pocket, every other Unicorn runs over to congratulate them. Teammates on the bench set down their beer cans and celebrate, too. 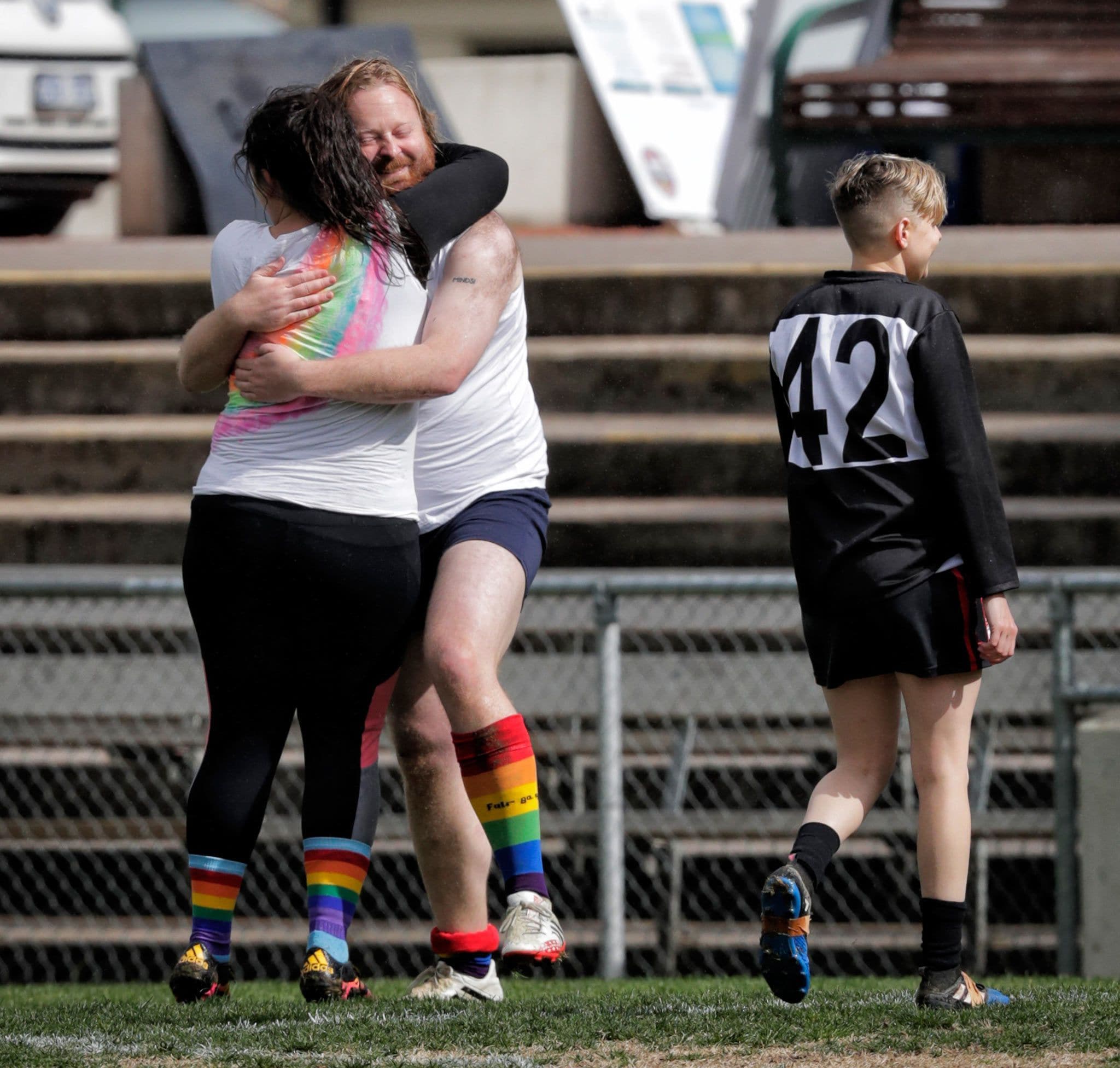 "Here you get a mix of people," says Annan. "People who have never played footy in their lives, as well as others who have fallen back on the game after time away from the sport. I love that I can enjoy watching it at such an elite level through the AFL and AFLW competitions, but then through Pub Footy we all get an opportunity to play."

Pub Footy games have been played at Victoria Park for four years. In its Victorian Football League heyday, the ground earned its reputation as one of the most hostile places to visit. Now the historic turnstiles and old beer advertising remain, but there are also signs for gender-neutral toilets.

The league makes a point of welcoming all people, regardless of gender, race, sexuality, culture, background or ability.

"After our Pride Round, we received an email from a man who had played footy when he was a boy," says league secretary and Workers Club Lion Dior Sutherland.

"As an adult, they had transitioned to a female and just hadn't felt like they could participate in footy since. They were so thankful to our league for giving transgendered people visibility and had begun looking at which team to join to play footy again."

Most times at the end of the game I don't know if we've won or lost.

Liam O'Shannessy, one of Pub Footy's founders, is standing in the outer with a beer. He enjoyed played footy at a more competitive level but grew tired of hanging around blokes all day.

"It's not to say that all blokes are the same, but life is so much more fun when you've got diverse people around you," O'Shannessy says.

"This league has elements of what I loved about country footy when growing up. You had a contest, but you always respected your teammates and had a drink with them afterwards. That sense of camaraderie is here as well."

As the games roll on, the teams not playing pitch in, taking on scoring duties, manning the bar and making dubious calls whilst goal umpiring.

There's music playing, people are buying a sausage, they're having a beer. Pub Footy is glorious.

To the doubters who didn't think Pub Footy would work, O'Shannessy's answer was to trust in human decency.

"People told me the guys would be injuring the girls and the games wouldn't be entertaining. But from the start, we all ultimately agreed it was about the love of the game and respect. If you respect each other, the league can be successful."

Adds Katie Cullen, Pub Footy general manager and Workers Club Lion: "There's not that pressure to have the best skill set. You're still congratulated for doing something that's at your level.

"I'll get one handball in a game – that for me is huge and I'm so proud of myself. Even though other people are at the point where they may have 16 touches or two goals, I still get recognised for doing my best. That can be rare in a competitive sporting league."

What we have is special. The footy is just a bonus.

Back in the Labour in Vain changerooms, the team falls quiet as player Michael Badman addresses the group. The Pains are playing in honour of their late teammate Johnsy, who died from cancer. On his passing, all teams in the league came together and formed a large circle on Victoria Park in tribute.

"We've got a lot of our families here, and we've got the opportunity to enjoy this day together. I also want to tell you that my wife and I were recently pregnant, but we sadly lost our child. We called that child El Fuerte. If you look that up on Google Translate Spanish, guys, it means 'The Strong One'."

As the pre-match warm-up begins, so do the hugs. Everyone gets around Michael and they sing the classic Bill Withers song Lean on Me before heading out through the guard of honour formed by other Pub Footy teams.

Says Katie Cullen: "What we have is special. It has become a community and a family. The people here become your closest friends. I hadn't really found that sense of community until I joined Pub Footy. That's what keeps me coming back. The footy is just a bonus."

Up Next Blues consider surprise return for defender ahead of Pies showdown
Why not share?
Share This Article
Video
Viewed