Secrets to success: How best to use the new utility position in Fantasy Skip to main content
Catchup on all the latest action from ${round}!
Previous
Next
Loading…
Watch every match of every round live and on-demand...
View Broadcast Schedule
Loading…

THE OFTEN redundant second bench ruck position is a thing of the past as in 2020 the fourth ruckman has been ditched in favour of a utility position in AFL Fantasy Classic.

Coaches can still choose to have a second ruck on the interchange, but it's completely up to you.

The eighth bench spot can be filled by a player from any position. They can still be used as emergencies for whichever line they have been selected and able to be subbed for any player with a matching position, on the field or on the bench.

A dual-position player (DPP) selected as a utility, such as Gold Coast draftee Sam Flanders as shown below, can be subbed for any midfielder or forward due to holding MID/FWD DPP. 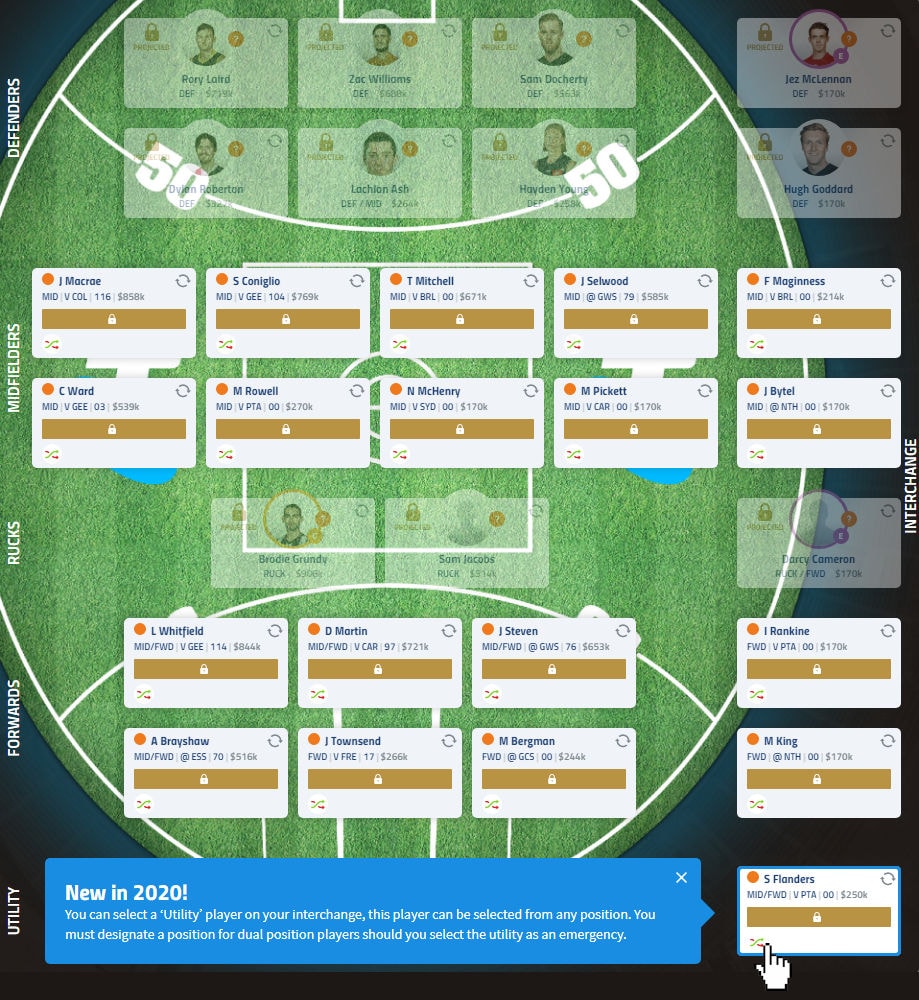 Your utility can be selected as an emergency as per other interchange players. However, as per previous seasons, if you have two players as emergencies for the same line, the lowest score will count if they both play. This would also be the case if you had three selected.

If your utility is a dual-position player, you will nominate which position they will cover on the bench.

There are a range of strategies coaches may employ to make the most out of the added flexibility of the utility.

Most will select another cash cow. Making money early in the season is the name of the game in order to upgrade players quickly and, ultimately, score more points. Midfielders are usually the best cash cows and have shown over the years that they are the most likely to play in the opening rounds.

But they also score higher, meaning they should probably be on your field rather than have three on the bench. On the flipside, it does allow you to stash three midfield cash cows and get you an extra premium player on the park.

Rolling with a DPP could be the way to go. The flexibility they open up when moving your players between positions, especially in the bye rounds (more on that during the season), could make a positive impact on your side, especially when covering injuries and suspensions.

A lot will be dictated by how many sub-$270k players are named in round one. We will want as many potential cash cows as possible to choose from to allow us to make choices about our on-field and bench options.

Alternatively, you could have a non-playing basement priced player that you could utilise for the vice-captain loophole over the first five rounds when there are Thursday night games.

As with anything new, we will learn as we go. At the moment, there is no right or wrong answer and we’ll look back at the end of the season to see which strategies would have given the greater benefit. For now, like many of our picks this early in the pre-season, there’s a lot of guess work and our thinking will change over the next few weeks before the first lockout.

With footy just around the corner, we look back at some of the top moments of the pre-season so far