IT HAS been a long pre-season and we've made it to the first game of the season. Our initial players will be locked in and the first points will be scored when the Tigers and Blues get things started for 2021.

Make sure you've registered, picked a squad of 30 players and created or joined a league so that you can have a heap of fun playing AFL Fantasy this year.

Don't forget you can win a TOYOTA HILUX valued at $60k if you're the overall winner of Fantasy Classic.

Teams will be announced the day before they play in 2021. This means a rolling lockout will be in place as teams for Sunday, for example, won't be known until after at least four games have started.

As each game begins, players from the two competing clubs are locked (ie. you can't trade in/out, change captain/vice captain/emergency if selected, etc). You are able to edit the rest of your team.

During round one, this becomes a challenge as you may pass up a player for someone later in the round only to find they are not selected. A fringe player from a club playing on Sunday may not make the cut and you will have limited options to replace them with.

Have a back-up plan but maybe picking players who play earlier in the round could give you piece of mind.

Bargain basement selections are the key to building your bank during the season.

Pick a $170,000 rookie, watch them appreciate in value and trade them out for another rookie a few weeks later. Use the cash earned to upgrade another player and hopefully gain more points.

Some clubs have already announced their debutants.

The announcement on Wednesday of the medical substitute has brought back some flashbacks for Fantasy coaches playing between 2011-2015.

Things are a bit better with the new medical sub as the substitute comes from one of the four emergencies, not from within their club's 22. The 23rd player for each team will be named 60 minutes before the bounce of the ball in each game.

This makes checking who is named as an emergency very important. Coaches should aim to have 30 players playing this weekend, all being within their club's 22. Avoid emergencies.

As the season progresses, holding a player who is named as an emergency could come with some risk if they are activated as a substitute. You run the risk of limited game time, a low Fantasy score and if they don't reach their breakeven, a price drop, hurting cash generation.

Please be patient this weekend as we navigate any issues having 23 scoring players may present.

Some coaches like to have a point of difference (POD) but over the years, it has been a positive move to start with a 'vanilla' team. Following what other coaches have done can get you on the right track. In most cases, players are popular for a reason. Whether that is due to their Fantasy scoring history or the perceived value of the picks, generally the crowd know what they're doing.

Below is a squad made up of some of the most popular players in Fantasy Classic. Some were added due to their availability this round while other decisions have been made around popular strategy, such as the $170k ruck in R2 that is gaining momentum. There is exactly $0 remaining … is it a sign that this is the 'perfect' team? 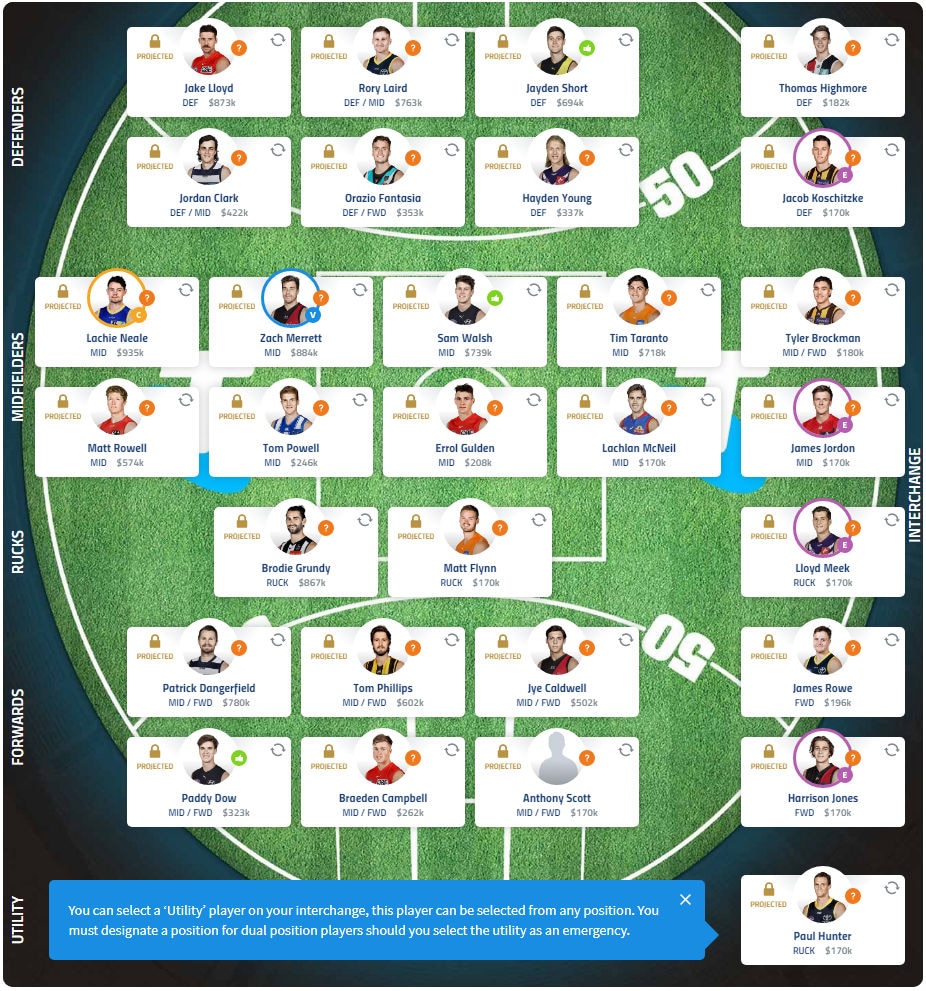