WESTERN Bulldogs swingman Aaron Naughton put some of the competition's best defences on notice last year, but his journey towards becoming one of the best forwards in the League is only in its infancy.

The 20-year-old finished with 53 contested marks for the year, trailing only Richmond star Tom Lynch.

Naughton's nine contested marks against the Tigers in round seven fell just one short of levelling North Melbourne great Wayne Carey's record for the most contested marks in a game.

The signs are there that he can become a special player, but Naughton knows he's got a few things to work on to get to the next level. 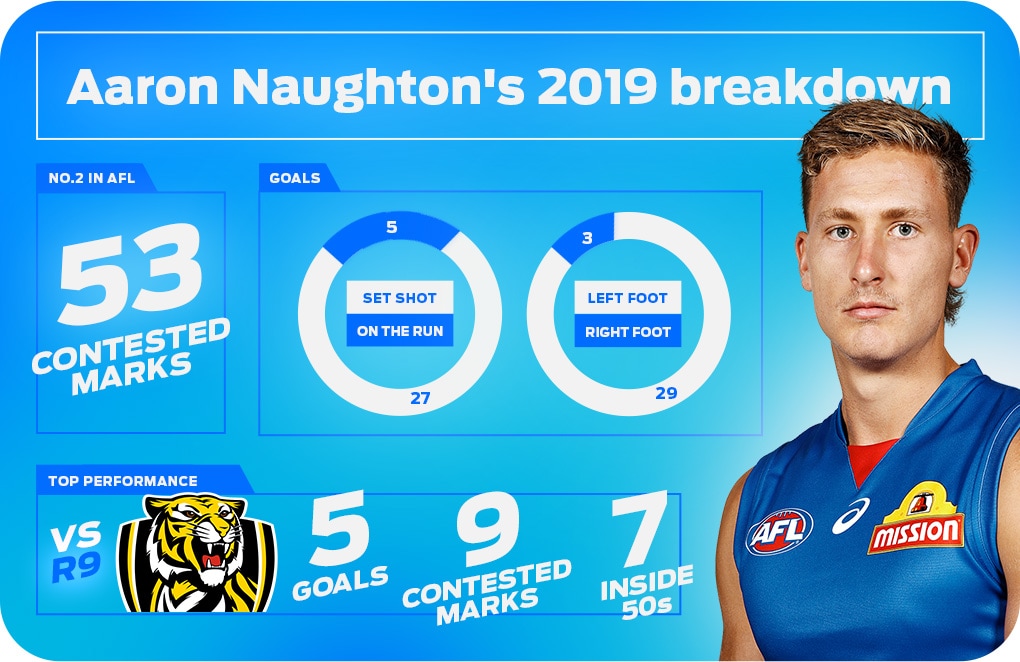 "It's more of my running patterns and timing of leads and repositioning are probably the little things that are going to help me going forward next year," Naughton said.

Forwards coach Ashley Hansen is charged with teaching Naughton the nuances of forward craft, with a focus on figuring out how to exploit each different defensive set up.

"The growth for this year is building on that game sense and in-match awareness to be able to apply different leading patterns and different craft for different defenders because sometimes you're double teamed," Hansen said.

"Different defenders do different things so to be able to negate that, it's probably going to be where he's going to take his game to the next level."

The two main defensive strategies at a basic level are categorised as either 'assertive' or 'back-shoulder'.

Some clubs will use different terms for that, but essentially assertive defences play in front of the forwards and will try and read the play and cut off the forwards' space to lead into.

Assertive defences are team-oriented and rely on switching opponents and guarding space. It's a tactic used by many clubs with mobile, intercepting defenders, but it relies on trust and communication between teammates.

Back-shoulder means the defender lines up just behind the forward's shoulder. It's more individual-based and means defenders are less likely to get beaten out the back, but it leaves plenty of space for the forwards to lead up into.

It's no surprise that two of Naughton's better games came against two of the League's best assertive defences in Geelong and Richmond.

After all, the Bulldogs employ the same strategy in the backline.

In the clip below, Naughton breaks down exactly how he gets an advantage against an assertive defence.

In the first instance, Naughton works up behind Blicavs to throw the Cats defender off before tracking back with the flight.

In the second play he curves his lead just after Blicavs turns his head.

Naughton is clearly advanced in a lot of areas already, but in terms of his forward craft development, the Bulldogs kept the messaging really simple.

The key forward admits he hasn't watched a lot of game tape, but Naughton has already discussed ramping that up with Hansen heading into the 2020 season.

The Bulldogs are keen to embrace Naughton as his own player, and as such the film room focus won't be on what other star key forwards do really well, but more about his own game and how he can exploit different defenders.

One area of the forward's game that could be improved with some film study is breaking down where the faults come into Naughton's usually sound goalkicking routine when he takes relatively straightforward set shots.

Eleven of Naughton's 23 behinds were kicked from 15 to 40 metres out on angles that weren't too tight.

Additionally, 74 per cent of the behinds Naughton kicked from set shots in 2019 faded to the left.

Naughton admits he really should be nailing those set shots, but it's not a case of the yips or dealing with fatigue.

"It was probably just not getting enough momentum through the footy, sort of poking at them a little bit and skewing them to either side of the goals," Naughton said.

"Making sure that every shot is consistent and looking like the one that he does nail it, that's going to be really important. When he goes away from that, that's when there's a flaw in his technique which is exposed on those shots."

Hansen is confident Naughton will be able to improve on that and won't miss those goals when it really counts.

"He likes the big moments, he's going to embrace it," the coach said.

It would be unfair to expect Naughton to follow on with his development instantly this year, as he's spent the vast majority of the pre-season with the rehabilitation group.

Naughton sustained lateral ligament damage to his left knee in the elimination final against Greater Western Sydney, but he's recently returned to full training and remains confident of playing in round one.

"From the incident to be where he's at, it really is a blessing because it could have been a lot worse," Hansen said of Naughton's injury.

"It certainly looks like he's got his straight-line speed and spring from the non-contact drills that he's been doing.

"That's going to increase over the coming weeks with the game-based non-scripted drills, he'll be able to ramp up the change of direction and agility and contact."

Once Naughton returns, not only will he have to get used to his knee, but also a completely different forward line structure.

Josh Bruce's arrival from St Kilda has been a positive for Naughton so far.

"Having Josh Bruce – I've been watching a little bit of his match sim and we're two pretty similar players. Both tall forwards, left footed, like to take contested marks. To be able to watch him, his patterns are really good," Naughton said of his new teammate.

"It's been nice even though I'm not out there to still pick up the way that he's moving, so hopefully when I'm back out there we'll be able to work really well together."

Hansen says it won't be a 'prescribed' plan, but expect to see Josh Schache and Bruce play closer to goal on occasions, with Naughton a little higher up the field.

The Bulldogs were pleased with Naughton's development as a link up forward, and that position could see him start to find more of the football every week.

"He also started to improve his positioning with getting more marks on the lead between the arcs. That also got him into the game and allowed us to move the ball out of our back half really well," Hansen said.

"He wasn't always just tied to the goalsquare or the 50-metre arc which I think supported his influence on the game and gave him the freedom to run a little bit."

Naughton has no doubts that the three-headed attack can work, and with a greater understanding of forward craft and improving his set shot accuracy from shorter distances, Naughton can truly thrive in the forward line.