In what was an unintended public posting, O'Brien detailed his plan to stop the Eagles star when the Crows play them on Saturday.

In the now deleted tweet, O'Brien revealed some of the ways the Crows may try and stop the Eagles big man. 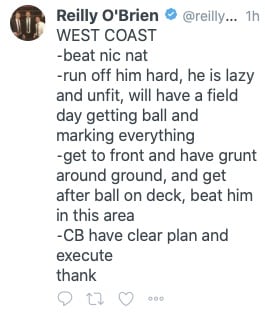 "Run off him hard, he is lazy and unfit," O'Brien's tweet said. "Will have a field day getting ball and marking everything.

"Get to front and have grunt around the ground, and get ball on deck, beat him in this area."

O'Brien, who is now the Crows' No. 1 ruckman after the departure of Sam Jacobs to GWS in the off-season, went back on Twitter to explain the online mishap.

He showed his cracked iPhone screen in a video posted to his Twitter profile, saying he regularly uses the 'notes' feature on his phone for positive reinforcement ahead of taking on the opposition.

"My phone's decided to cark it and I've had an absolute 'mare' on my social media today. It tweeted some of my game notes from my iPhone. I take a few of these notes every week before the game to try to pump myself and get a bit of confidence going into the game," O'Brien said.

"I make a few things up, as you can see on the notes, to try and give myself confidence.

"Coming up this week against who I think is probably the best ruckman in the competition at the moment, 'Nic Nat', I was just trying to get some confidence and get going.

"I've really put the pressure on myself now so I've really got to walk the walk this week and try to get a kick against the supertsar that is Nic Nat so we'll see how I go."