WHAT a week it has been! We have got the word. All systems are go for the 2020 season and of course, another big year of AFL Fantasy.

It has been a long pre-season. From the Telstra AFL Trade Period and NAB AFL Draft through to the Marsh Community Series, coaches have been taking in all of the information and picking their squads to take on the competition, and their mates, for the ultimate glory!

Coaches need to have their Richmond and Carlton players locked in before the bounce of the ball for the partial lockout commencing on Thursday at 7:40pm AEDT.

LOCK IT IN Pick your team now

Once the partial lockout comes into effect, you will be unable to select any Tigers or Blues or move them in your team. Once they’re in your team, they are locked into that position, be it on field or on the bench. If they are named as captain, vice captain or emergency, they will remain as that until the round is over.

Coaches can edit the rest of their squad, using unlimited trades, right up until the full lockout on Friday at 7:50pm AEDT when the ball bounces for Western Bulldogs v Collingwood.

In case you’ve forgotten, the biggest prizes in Fantasy footy can be won by playing the Official Fantasy game of the AFL.https://t.co/T7uWSMFBtk

Marlion Pickett (MID, $170,000) has been the most picked player in Fantasy Classic since late-January. He has been named on the interchange for the Tigers. Dustin Martin (MID/FWD, $721,000) is at full-forward.

The seventh most selected player is Sam Docherty (DEF, $563,000). The co-captain returns to the Blues’ line up for the first time following two seasons out with consecutive ACL injuries.

Fantasy coaches are always keen for news on round one debutants to slot into their teams as cash cows. The Giants announced that Tom Green (MID, $252,000) will play his first game on Saturday night while father-son Tyler Brown (MID, $170,000) will suit up for the Magpies on Friday night.

The Dockers announced that Sam Sturt (FWD, $170,000) will make his debut this weekend.

Build your team around these guys

Dan Houston (DEF/MID, $596,000) - After spending the majority of last season in the back line, the Power youngster was given an opportunity in the midfield toward the end of the season and he hasn’t looked back. He attended plenty of centre bounces across the Marsh series for scores of 95 and 61.

Sam Dochery (DEF, $563,000) - The Blues co-captain has ticked all boxes this pre-season and did more than enough in the Marsh series to back him in with confidence. He ranked second in uncontested marks in the defensive half during that time and will hit the ground running against the Tigers who give up plenty of marks to defenders.

Dylan Roberton (DEF, $327,000) - The returning Saint is an easy selection after not missing a beat in his Marsh appearance where managed 70 from 82 per cent game time. He is basically a premium for the price of an inflated rookie.

Stephen Coniglio (MID, $769,000) - The newly appointed skipper was already looking like a bargain at the start of the year but the injury to Tim Taranto, combined with his sole Marsh score of 149 more than confirmed it. He is set for a huge year.

Tom Mitchell (MID, $671,000) - The little Pig returned from his broken trotter like it never happened, finding the ball at will though a successful Marsh return. Over the two games he tallied 72 and 100 respectively while scoring at 101 points per 100 minutes. An absolute bargain.

Tom Green (MID, $252,000) - The highly touted junior has earned himself a debut after impressing this pre-season which was typified by an impressive Marsh series where he was second the Giants for centre bounce attendances. In that time he retuned impressive scores of 76 and 68. Lock and load.

Brodie Grundy (RUC, $906,000) - Base your team around the man who averaged 122 last year. While over half of the Fantasy coaches have locked Grundy away, others are cutting costs and ignoring the best player in the Fantasy game, a decision that will only come back to haunt you.

Some coaches have found value in Sam Jacobs (RUC, $514,000) and Sydney’s newly crowned No.1 ruckman Sam Naismith (RUC, $284,000). Both have had terrific pre-seasons and present as tremendous value. While some have split the pair to sit alongside Grundy, others are running the gauntlet with both.

Lachie Whitfield (MID/FWD, $844,000) - Starting with the most expensive forward isn’t always the best option but when it comes to Lachie Whitfield, you’re getting what you paid for. After a post-season ankle reconstruction, Whitfield not only played in the State of Origin game but he fronted up for the final Marsh Series game and scored 108.

Andrew Brayshaw (MID/FWD, $516,000) - Brayshaw played as a midfielder for the Dockers from round 17 last year at an average of 83. Over the pre-season we needed to see him receiving more midfield minutes, and we were not disappointed. Brayshaw attended 68 per cent of centre-bounces, the highest of any Docker with scores of 118 and 90. Not bad for a mid-prided player who averaged 70 last year.

Max King (FWD, $170,000) - Although he didn’t set the Marsh Series on fire, King will play this weekend. His average of 45 over the Series isn’t anything to get overly excited about, but he will slowly make you cash on your bench. 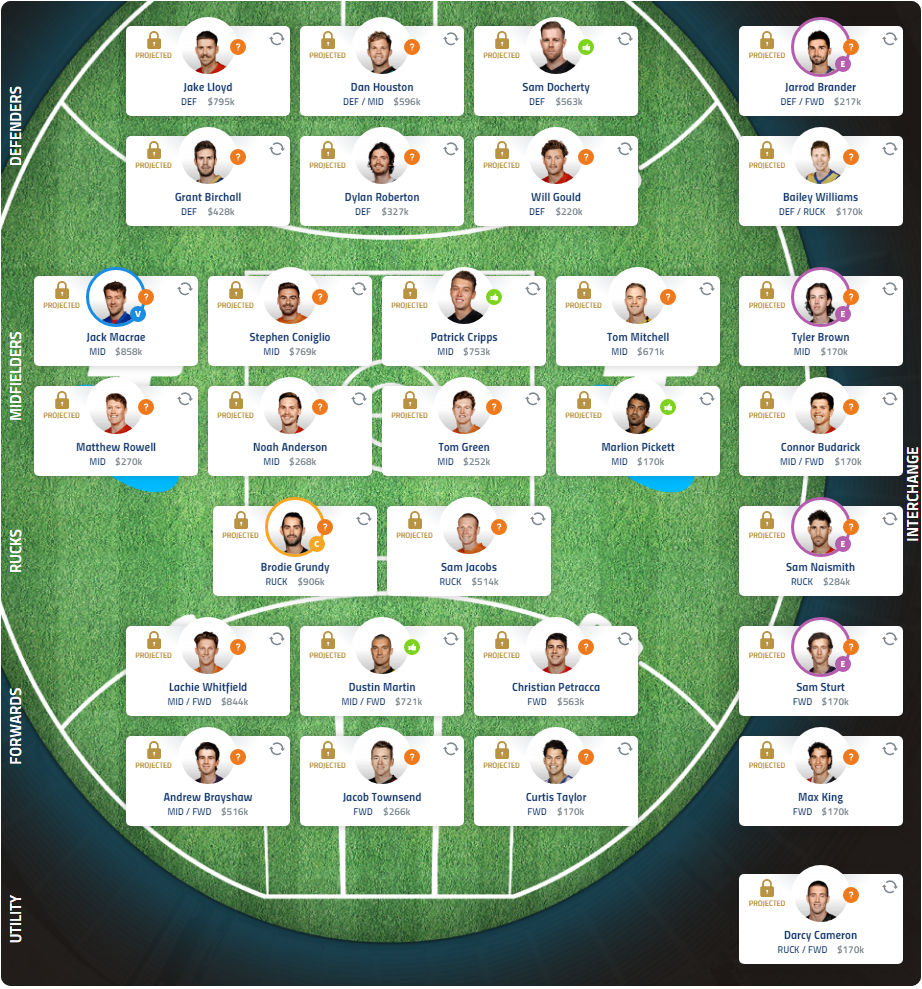 Make sure your team has a captain! This is a critical part of your weekly preparation as your captain will score your team double points. Nailing a great captain is pivotal. Those who selected Stephen Coniglio when he had his 192 enjoyed a massive score of 384 ... just from one player. Here are the best captain selections for the weekend ahead.

On Friday night, Grundy meets Tim English, a man he scored 168 and 153 against last year. If you have paid up for Grundy, then these are the games you have targeted to justify his $906,000 price tag.

The Bulldog midfielder scored 118 in his last game on the Pies last year and loves playing at Marvel where he averaged 130 in his last nine games. Don’t expect him to be anything under 120.

Whitfield scored 124 on the Cats last year along with an average of 124 at home which included some big scores of 190 and 162.

Merrett is back at Marvel Stadium where he averaged 117 last year. He loves playing the Dockers and scored 124 and 125 on them in 2019.

ICYMI - The much loved Drag and Drop feature is back on the desktop site. Head to https://t.co/T7uWSMFBtk and sort your team in whatever order you like! #AFLFantasy pic.twitter.com/J5ahii55Zr

Percentage or points for.

Decide how your league's tiebreaker is set. If two teams finish on the same amount of wins, you can choose to have percentage (points for divided by points against) as the decider or just simply points for.

Once you’ve settled on your 30, be sure to appoint you captain, vice-captain and nominate your four emergencies. It is preferable to have one per line as if you have two emergencies named in a position, the lowest scorer will come on in the event of a late withdrawal.

Once full lockout is in effect on Friday, you can put your feet up and follow every stat on the website or via the app as the games play out.

This season will be unique. Stay tuned to AFL.com.au for news on any adjustments to the Fantasy gameplay due to the changing nature of the season.

Join The Traders streaming live on Facebook from 6pm AEDT as the round one teams drop. They will be providing commentary around team selections and answering last-minute questions.

Who's struggling, who's a test? Check out the players from your club who are a little sore