Give them a contract now: Your club's biggest re-signing priorities Skip to main content

WITH three rounds left in the home and away season, more than 300 AFL players remain without finalised contracts for next season.

As clubs await on exact salary cap numbers and list sizes for 2021, conversations with agents for a host of players remain ongoing behind the scenes.

Where are those talks at? Who needs a contract? And who is your club's biggest priority?

The team at AFL.com.au dissects each club.

Crows coach Matthew Nicks has said that Crouch has intimated he wants to stay at Adelaide at the end of this season. But the star midfielder's future is still unclear after his interest in joining Gold Coast at the end of last season. This time around he's a restricted free agent, meaning the Crows can match an offer and force a trade, or they could take a compensation pick for him, which could be No.2 if a rival deal is big enough. The Cats are in the mix for Crouch, while the Saints showed their interest last year. - Callum Twomey

Others out of contract: Kyle Hartigan, Ben Keays, Jordan Gallucci

The veteran ruckman has battled with his body this season, playing just five games, and is currently trying to overcome a stress reaction in his back. Brisbane has 37 players already contracted for 2021, meaning 33-year-old Martin will have to wait until season's end to learn his fate. Watch for the Lions to move early on Harris Andrews, Hugh McCluggage and Zac Bailey, who all come out of contract in 2021. - Michael Whiting

Others out of contract: Ryan Lester, Allen Christensen, Sam Skinner

Has been a mainstay in the Blues' defence and was last year rewarded with a podium finish in the best and fairest. May not receive the plaudits of some of his teammates but is highly regarded at the Blues. Talks for Plowman are progressing with a new deal expected to be inked shortly. It would add another piece to the Blues' backline that includes the signatures of Jacob Weitering (2025), Liam Jones (2022) and Caleb Marchbank (2022) who recently inked a fresh extension. - Mitch Cleary

Others out of contract: Michael Gibbons, Nic Newman, Tom Williamson

Expect Collingwood to prioritise the re-signing of Moore over Jordan De Goey. The club would obviously love to secure both on long-term deals, but the important form and consistency of the star defender has seen him establish his place as arguably the side's most influential player this year. Moore said earlier this season that he would no longer be expecting a mega offer, given the situation involving the COVID-19 pandemic, but expect his worth to be recognised. Rival clubs would love to lure him out of the Pies. - Riley Beveridge

Daniher proved last week that he remains the Bombers' most talented player and a genuine matchwinner. In just his 12th game in three seasons, the key forward kicked three goals in a stunning return. After last year's failed trade bid to Sydney, Daniher can depart as a free agent this time around. The Bombers want to keep him but won’t know how it sits until the end of the year, but do have the rights to match an offer and force a trade. Either way, after his performance last week the compensation would be high if he departs. - Callum Twomey

Others out of contract: Andrew McGrath, Jordan Ridley, Adam Saad

The positive to come from Fremantle losing key defenders Alex Pearce, Joel Hamling and Griffin Logue to injury this season has been the improvement of Brennan Cox. However, with that has come rival interest in the uncontracted South Australian. The club has a difficult decision to make on Cox. Do they put a long-term deal in front of him? Or, with the aforementioned trio on the comeback trail and given the rapid rise of fellow defender Luke Ryan, do they attempt to cash in on his value? There's a lot to play out. - Riley Beveridge

Others out of contract: David Mundy, Lachie Schultz, Brett Bewley

Talks to this point have been reasonably slow but they're expected to intensify in coming weeks. As Hawkins prepares for a second consecutive Virgin Australia AFL All Australian blazer and potentially a Coleman Medal, the Cats will consider a two-year deal for a man who turned 32 in July. After a persistent back injury three to four years ago, Hawkins' body has held up for him to play every match through the Cats' condensed fixture this year. - Mitch Cleary

No disrespect to Harbrow – one of the greatest players in club history – but the fact he is the biggest name out of contract shows the Suns are in good shape. Most of their key pillars are locked up long-term with youngsters Charlie Ballard and Wil Powell the priorities for 2021. - Michael Whiting

Others out of contract: Jesse Joyce

Last year's Coleman medallist looks set to delay a decision on his future until the end of this season as he weighs up a massive call. Although rivals believe Cameron will most likely stay at the Giants, he had spoken about re-signing after the contract freeze had ended. That hasn't happened and it's also created a backlog of deals that the Giants have to work through but can't concentrate on until they get Cameron to sign on for 2021 and beyond. Geelong and Essendon have been linked as interested parties if Cameron explores his options. - Callum Twomey

The former Sun is one of the Hawks' precious few bright prospects and he's proven a bargain recruit since crossing there two years ago, after originally being a top-10 draft pick in 2016. Scrimshaw started the season out of the senior side after a pre-season ankle injury, but his form down back has improved the longer the year's gone. He's a priority signing and will be in brown and gold next season, but discussions are parked at the moment with the uncertainty about list sizes. Scrimshaw's certain to score a multi-year deal. - Marc McGowan

Viney's a restricted free agent and his situation was always going to attract interest, especially once Max Gawn replaced him as captain. His form's been mostly strong as a key member of the Demons' centre-square combination. The widely held belief is Viney's family connection to the club – his father Todd is a Melbourne great – and vice-captaincy status will see him remain in red and blue. Coach Simon Goodwin is on record saying he expects Viney to be a long-term Demon. - Marc McGowan

Brown's season is over, with the Kangaroos sending him in for surgery instead of risking a recurrence of his knee issue. His management and the club had entered negotiations prior to the contract freeze, but his form woes, age (he turns 28 in November) and North's struggles have complicated matters. Both parties now have a decision to make, with the likes of Brisbane, Collingwood and Essendon all in need of a quality tall forward. The Roos might see an opportunity to add another early draft pick, but losing Brown would leave a significant hole in their forward line. - Marc McGowan

It has been a big week for Port Adelaide, who has locked away both of its high-profile uncontracted stars in Sam Powell-Pepper and Charlie Dixon to fresh three-year deals. Now, after a season in which he has been reinvigorated in the backline, expect McKenzie to be next. Although his career looked at a crossroads just a few months ago, McKenzie has excelled as the side’s third tall defender and has formed a solid partnership with Tom Jonas and Tom Clurey. Once an outcast, expect his future at the club to be secure soon. - Riley Beveridge

Others out of contract: Brad Ebert, Jarrod Lienert

The 2017 premiership midfielder's last month has shown his worth to the Tigers. Graham was again among the best as the Tigers beat Fremantle on Wednesday night and has showed his value without Dion Prestia, Kane Lambert and Shane Edwards. Has suitors to leave – mainly namely Essendon and Adelaide – but at 22, should be seen as the future of a midfield that has Edwards and Cotchin on the other side of 30. - Mitch Cleary

After the Saints secured Jack Steele's signature on Thursday, Paton becomes the club's next mainstay from its best 22 tick off. The Saints and Paton's management have been in dialogue for close to a month and are edging closer to a fresh deal. The 21-year-old has taken the scalps of Tom Papley, Charlie Cameron and Eddie Betts this season as his reputation builds as one of the best lockdown small defenders in the competition. - Mitch Cleary

Melican's three-year deal expires at the end of this season. The key defender's had an injury-interrupted campaign, playing only six games, but he's finally managed to get some continuity in the past month. There's been rival interest in the 23-year-old previously, but the Swans will be keen to lock him away, because he should be a key piece of their backline for seasons to come. The two parties are set to begin negotiations. - Marc McGowan

At the start of the season all indicators pointed to Kennedy calling time at the end of 2020. Now in the midst of another stellar season, he's in talks for a one-year extension. The Eagles and his management are going to wait until season's end to tick off on any deal but like Shannon Hurn, his form this year suggests he's in a position to go around again at 33. Another year at the Eagles for Kennedy would ease the reliance on Oscar Allen and Jake Waterman in attack. New deals for Liam Ryan and Jack Petruccelle have been all but agreed in principle so their names have been scrubbed off the list. - Mitch Cleary

The 2016 premiership skipper had started talks on a new deal before the COVID-19 pandemic engulfed the AFL and saw new contracts suspended. But he's expected to sign on soon with the Dogs beyond this season and remains an important part of their backline mix. The Bulldogs have done a good job of extending their young talent after this year, with the club in discussions about captain Marcus Bontempelli's next deal (he falls out of contract at the end of 2021). - Callum Twomey

Others out of contract: Taylor Duryea, Lin Jong, Jackson Trengove 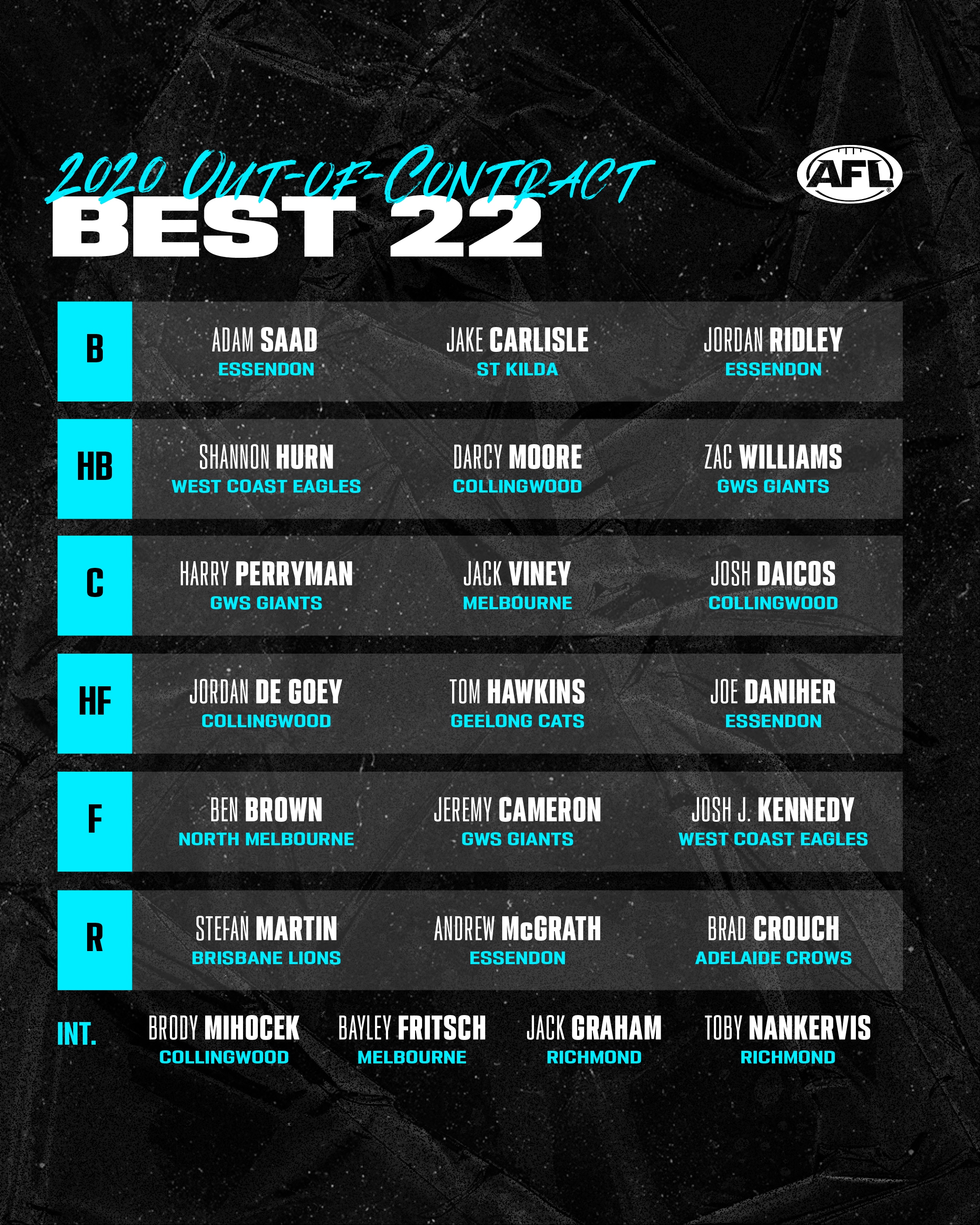