2020 NAB AFL Draft smashes all-time viewing records Skip to main content
Catchup on all the latest action from ${round}!
Previous
Next
Loading…
Watch every match of every round live and on-demand...
View Broadcast Schedule
Loading…

THE AFL has announced that the 2020 NAB AFL Draft held on Wednesday, December 9, attracted a total audience of 351,585 – the most watched draft in the history of the game.

The historic 'virtual' draft was up 60 per cent on last year's NAB AFL Draft, with audiences tuning in through the AFL Live Official App (with thanks to Telstra), AFL Digital channels on web and broadcast, Fox Footy and Kayo.

The NAB AFL Draft was the No.1 rated program on Foxtel on December 9, and was an industry-wide collaboration with AFL Club Draft rooms in 18 different locations and broadcast feeds across 35 different venues across Australia.

AFL chief Gillon McLachlan expressed his thanks to football fans across the country, and thanked the draft's broadcast partners – Telstra, AFL Digital, and Foxtel.

"I want to acknowledge the efforts and collaboration of our draftees and their families, the 18 AFL clubs and our broadcast partners to put together a unique 2020 NAB AFL Draft and present a memorable experience for our newest draft class," McLachlan said.

WHO SMASHED IT? Our say on your club's draft performance

"It's a life-changing moment to hear your name called. While it was the preference to all be in the same location and share in the joy of being selected, the broadcast of the NAB AFL Draft provided draftees, fans and supporters with an insight into the future of our game and the players who will excite supporters for many seasons to come."

EVERY PICK, EVERY PLAYER Check out who you just drafted

NAB AFL Draft Night Live hosted by Nat Edwards, Riley Beveridge and 'draft guru' Cal Twomey on AFL Digital channels was up 103 per cent on 2019 with 170,342 viewers tuning in while 834,000 fans followed the AFL LIVE draft blog on AFL.com.au and the AFL Live Official App.

Cal Twomey's Phantom Draft, a regular feature of the NAB AFL Draft coverage, attracted more than half a million readers. 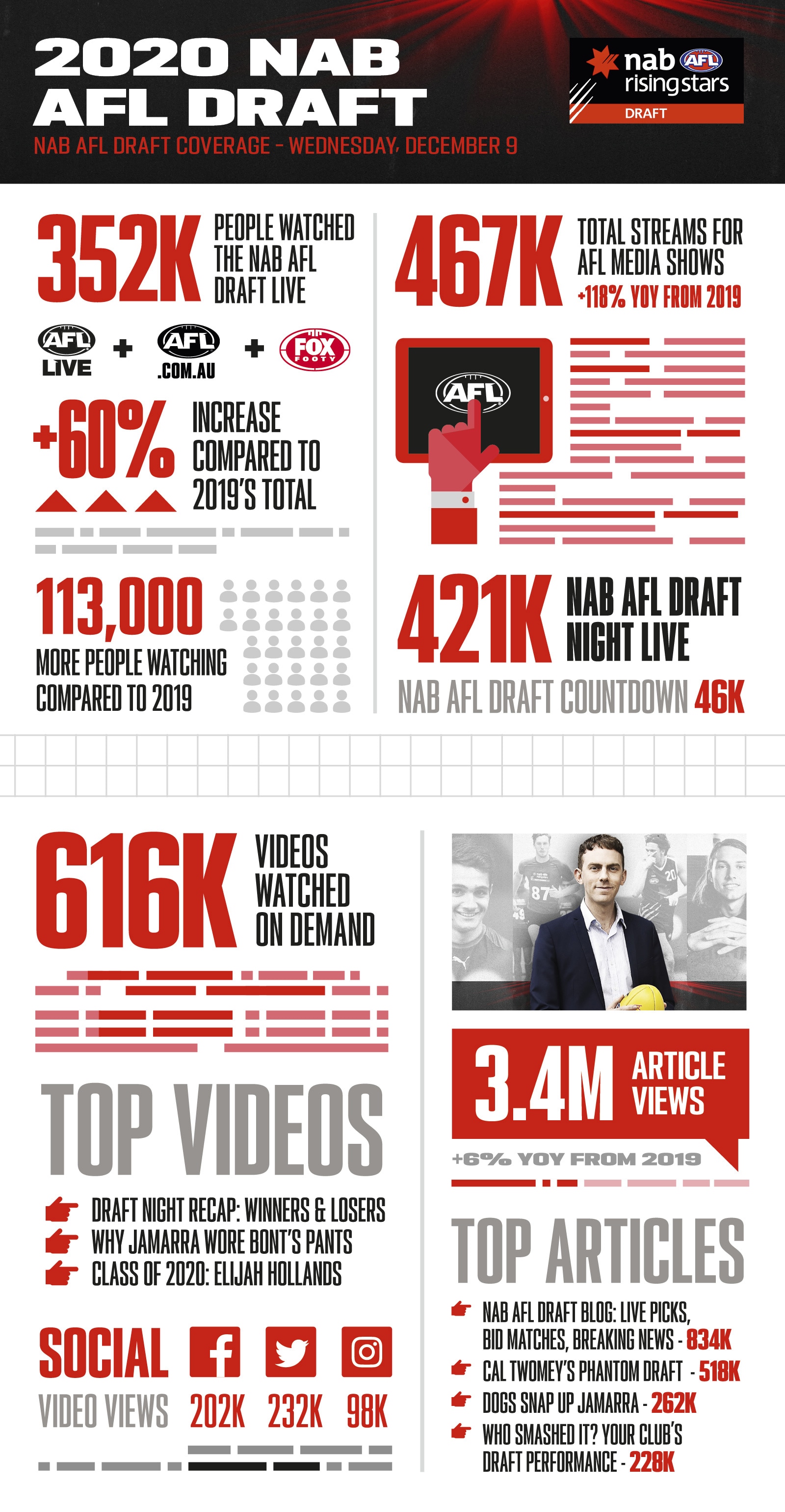 Special journeys to the AFL

Watch this stunning four-part series in AFL ON Demand today